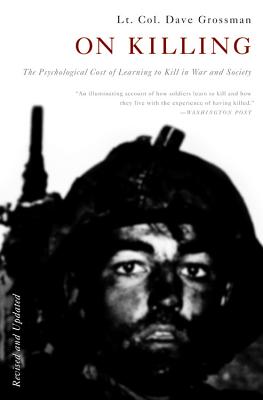 On Killing: The Psychological Cost of Learning to Kill in War and Society

Upon its initial publication, "On Killing" was hailed as a landmark study of the techniques the military uses to overcome the powerful reluctance to kill. Now, Grossman has updated this classic work to include information on 21st-century military techniques. Read More

Upon its initial publication, "On Killing" was hailed as a landmark study of the techniques the military uses to overcome the powerful reluctance to kill. Now, Grossman has updated this classic work to include information on 21st-century military techniques. Read Less

All Editions of On Killing: The Psychological Cost of Learning to Kill in War and Society

On Combat: The Psychology and Physiology of Deadly Conflict in War and in Peace

Assassination Generation: Video Games, Aggression, and the Psychology of Killing

Spotting Danger Before It Spots You: Build Situational Awareness to Stay Safe

Lone Survivor: The Eyewitness Account of Operation Redwing and the Lost Heroes of Seal Team 10

Sharpening the Warriors Edge: The Psychology & Science of Training

Stop Teaching Our Kids to Kill: A Call to Action Against TV, Movie & Video Game Violence

The Gift of Fear: Survival Signals That Protect Us from Violence

For the Children of Combat Veterans

My Dad, Neil Alexander Kelley, fought the Japanese in WWII. He was an emotionally detached father and he only told me one word about his combat experience. One day, when he was watching baseball in the early Sixties, I popped the impertinent question "Dad? How many Japs did you kill?". His locked jaw expression didn't change and he said flatly "Eight.". Years later I learned that Neil was a member of the 2nd Marine Raider Battalion. The Marine Raiders were our first Special Forces. He fought in some of the bloodiest battles of the war in the jungles of Bouganville, the beaches of Guam and the hills of Okinawa. The killing he did was at close range. This book explains why my Dad took his own life in 1967.

A highly recommend book for any person interested in the under-researched field of the psychology of killing. Anyone who may have to kill as part of their duty (e.g., military, law enforcement, citizen protecting him/herself) will benefit from this book. For those who embody in modern society a warrior ethos, this will complete your libary!

8The Ugly Truth of War

This book, written by a combat veteran, breaks down various wars and shows that most human beings, who, being placed in the role of soldier, either by volunteering, or by draft,
have very little interest in killing other human beings if at all possible. The true killers, as the author states, are the ones who are able to disassociate the fact that they are killing, or in some cases, murdering, their fellow man.

LTC Grossman then goes into the dichotomy of how combat action affects the individual based upon their relative distance to the soldiers of the enemy whom they are having to shoot; from the grunt on the ground; and those who have to deal the most with PTSD, to the bomber pilots who feel nothing from their job, because they are dropping their lethal loads to coordinates on a map. The further you are away from your target, the less guilt you'll feel afterwards.
I am a retired soldier and highly recommend this book to patriots and pacifists alike;
as both sides will find common grounds that they had not previously considered.