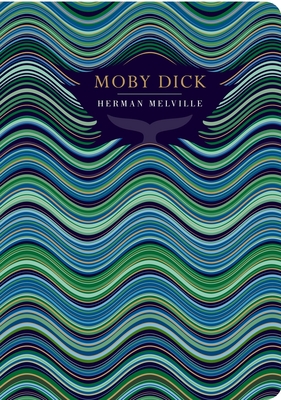 Chiltern creates the most beautiful editions of the World's finest literature. Your favorite classic titles in a way you have never seen them before: the tactile layers, fine details and beautiful colors of these remarkable covers make these books feel extra special and look striking on any shelf. This hardcover book has a matching blank lined journal (sold separately). They make a great gift when paired together but are also just as beautiful on their own. Moby Dick tells the story of Ishmael, who announces his intent ... Read More

Chiltern creates the most beautiful editions of the World's finest literature. Your favorite classic titles in a way you have never seen them before: the tactile layers, fine details and beautiful colors of these remarkable covers make these books feel extra special and look striking on any shelf. This hardcover book has a matching blank lined journal (sold separately). They make a great gift when paired together but are also just as beautiful on their own. Moby Dick tells the story of Ishmael, who announces his intent to ship aboard a whaling vessel. He has made several voyages as a sailor but none as a whaler. He travels to New Bedford, Massachusetts, where he stays in a whalers' inn. Since the inn is rather full, he has to share a bed with a harpooner from the South Pacific named Queequeg. At first repulsed by Queequeg's strange habits and shocking appearance (Queequeg is covered with tattoos), Ishmael eventually comes to appreciate the man's generosity and kind spirit, and the two decide to seek work on a whaling vessel together. Read Less

All Editions of Moby Dick

Moby Dick or the Whale

Billy Budd, Bartleby, and Other Stories

The Confidence-Man: His Masquerade

The Grapes of Wrath

This book was just like new & in excellent condition.

Whaling is a deep subject.

A lot of people can't understand Moby-Dick. And I think, to an extent, nobody can fully understand this book who doesn't know at least a little about the transcendentalist movement in American literature.

Transcendentalism, to Thoreau and Emerson, et al., was the idea that one can get to know God by studying nature. Thoreau was transcendentalism's greatest proponent. That's what 'Walden Pond' was all about.

Melville used Ahab and the whale to show (to put it as simply as possible) that one thing we learn when we study nature is that God isn't necessarily a creature we'd like to be closely acquainted with. When little Pip, the cabin boy, falls out of the whaleboat -- to take one example -- he sinks down and down, then he goes down a little farther, then farther still, and then he sinks some more until, bye and bye, he sank so far down in the ocean that he 'saw God's foot on the treadle of the loom.' At that point his mind snapped and when he finally broke surface, he was as crazy as a crap-house mouse. Having seen God, he became a madman, and his derangement was permanent.

Ahab is crazy because he, too, has met God -- and the damned thing took his leg off. He was not happy about losing his leg. He has sworn vengeance on God (manifest in the unstoppable power of the whale) and he will have it if it kills him -- as of course it finally does. Ahab's rage against God reflects the human creature's rage to order the insane universe (God) in which we live.

I mean, that vein is deep and rich. Moby-Dick gives us plenty of room to think and plenty of material to think about, and if we bother to think about it we'll be thinking for a long while. How about the scene where the men sit in a circle around a tub, squishing spermaceti between their fingers? Is there a circle-jerk going on there? Is there a hint at the homosexuality that was so common in all-male crews who spent months and years at sea?

In sum, I believe the novel has at least three purposes and at least two of those are didactic. On the one hand it discourses on transcendentalism, on the nature of God and the nature of man and the relationship between them. On the other hand, it discourses on the life of the whalers. We learn from reading Moby-Dick a very great deal about life and work on a wooden, wind-powered, Yankee whaling vessel. You can read it one way, you can read it the other way, or you can read it as a straight-up, meaningless adventure yarn. No matter how you read it, it's a whale of a tale and it's one that always yields more to those who re-read it.

I give it five stars because I think it earns every one of 'em.

Where to start with Moby Dick...

Had to read this book for English. The opening was really interesting, and it wasn't too bad until they were on the boat and Melville goes on and on about whale parts. I was warned about this in advance, so I just skimmed over those parts. It's really a great classic story if you can get beyond Melville's style at times.