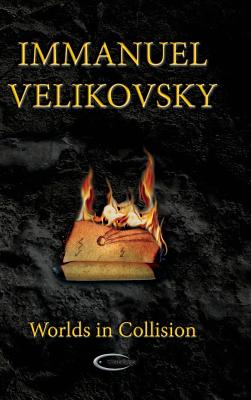 With this book Immanuel Velikovsky first presented the results of his interdisciplinary research to the public, founded modern catastrophism, shook the doctrine of uniformity and Darwin's theory of evolution, put our view of the history of our solar system and of the Earth on a new basis - and caused an uproar that is still going on today. Read More

With this book Immanuel Velikovsky first presented the results of his interdisciplinary research to the public, founded modern catastrophism, shook the doctrine of uniformity and Darwin's theory of evolution, put our view of the history of our solar system and of the Earth on a new basis - and caused an uproar that is still going on today. Read Less

All Editions of Worlds in Collision

Ages in Chaos II: Ramses II and His Time

Oedipus and Akhnaton: Myth and History

The Wars of Gods and Men

Wherever Immanuel is now I wish to thank him for this fabulous and well-supported theory.
After years of frustration and questioning I now have a totally new way of explaining many previously impenetrable stories, psalms, artwork and religious symbolism and scripture.
I even begin to see why humans are so easily controlled! Can really understand why this work has been suppressed. Readable and fascinating.

I bought this book for my mother, so I have no idea what the book is about.

Velikovsky offers a profoundly different way of thinking about human history with a model that would expand physical considerations. Truth or fiction, it's an important dimension of the human story.

Immanuel Velikovsky was a man before his time he was open minded, analytical, able to think independently of others and especially the main stream even to his detriment. His research and time dedicated to writing Worlds in Collision is unmatched in modern literary circles and the knowledge this book contains cuts through some of the World's Elite dictation of what you should believe and were taught to believe and this was the main reason Mr. Velikovsky suffered the harrassment and ostricisation he experienced. When you play with the big boys you must play as they say or suffer the consequenses, unfortunately to many of us are playing along and not exploring and questioning the purported truth. Start your journey to an open mind with this Galactic Voyage into another reality the reality of Mr. Velikovsky's emphasis on ancient civilizations and their historical data long preserved.. God Bless You for speaking for all people of open minded thought Mr. Velikovsky. I won't even try to express my thoughts of this book only emphasize it is a must read as it is a gateway to unsuppressed thought.

When Worlds clashed with Worlds

If it's one's notion that no significant event has ever sculpted the face of earth and Solar System for ?millions? or ?billions? of years - Reconsider! The author will show, quite the contrary, all has not been so uneventful. From testimonies of traditions, legends, and sacred writings, ?collisions?, or close encounters of actual ?worlds?, in the celestial sphere including our earth, had actually taken place. The earth?s rotation was disturbed, with great destructions of land masses, thousands of volcanoes activated, boiling of the oceans, world wide hurricanes, forests and abodes of man swept away, resulting in terminations of civilizations, great losses of human lives, and in the annihilation of many species of animals. In other words: The Order of the Solar System was disturbed in historical times, not just once, but many times, early and pre-history.

To follow this book one does not need a doctorate or whatever degree. As the author states, it ?is for the instructed and non-instructed alike?. But required is to stretch one?s imagination, for the cosmic scenarios are stupendous in scale - and such incredible stories! Like H.G. Wells? War of the Worlds, and Philip Wyle and Edwin Balmer?s When Worlds Collide, Velikovsky?s Worlds In Collision is also very entertaining and thrilling to read. But unlike the first two: This book is NOT fiction, - but NON-FICTION!

It covers the last two series of cosmic disturbances, each on a familiar planet, the ?celestial prodigy? responsible. To start, theories on Solar System formation are reviewed. In a variant of one, terrestrial bodies were formed by expulsion from larger ones. Such ?appears to be the case? according to the author: for one of the terrestrial bodies was seen to erupt, or was ?born?, from Jupiter (so was said by most ancient writers, a minority saying it was Saturn). After a long career as a cometary proto-planet, as it careened through the Inner Solar System with disasterous consequences, it finally ?settled? into becoming a planet itself - "A Great Star that joins the Great Stars"! And mankind, for along time, was in terror in anticipation of a 'close encounter' with this ?Star?, for it ??would cause enormous destructions from rising to setting?. Such fears of "heavenly wrath", much ballyhooed as "childish" or "superstitious", are now understandable.

But most significant: Electrical forces played a major role in those celestial encounters, not just gravity alone. We read references of ?heavenly fires?, or of ?sparks?, that flew between the ?planetary-gods? in near incounters. Examples of Theomachy (battle of the gods) are sited in Homer?s Iliad, between Athena (Venus) and Aries (Mars), the two main ?planetary? protagonists in the sky, while on earth battles raged in the plains of Troy. Apparently, great inter-planetary electric discharges were exchanged between the two celestial bodies. And earlier, of times of Exodus, we also read of ?great sparks? exchanged between our world and another! These scenarios of ?celestial dramas? the author was able to reconstruct, shed great light on how important electro-magnetism is in the cosmological realm, long before it was even considered in the space sciences.

A practicing psychoanalyst who had written many articles on mental processes before, a scholar, and a multi-linguist, the author has pieced together and revealed the terrifying nature of those events that devastated the earth and traumatized the survivors. As remembrances of some traumatic event been assembled for an amnesia victim to understand, so was the same done for mankind. And we MUST face our past, according to the author, or the still much 'suppressed' collective unconscious will continue to shape and disturb and perturb the psyche AND behavior of mankind.

This 'new aspect' of our planetary neighbors, the book reveals, sweeps away the "Gee Whiz" of them to that of humbling, tamed for now, but before, of "terrifying" astral powers.