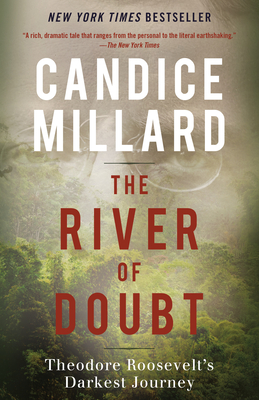 All Editions of The River of Doubt: Theodore Roosevelt's Darkest Journey

Hero of the Empire: The Boer War, a Daring Escape, and the Making of Winston Churchill

Destiny of the Republic: A Tale of Madness, Medicine, and the Murder of a President

Hero of the Empire: The Making of Winston Churchill

The River of Doubt: Into the Unknown Amazon

The Devil in the White City: Murder, Magic, and Madness at the Fair That Changed America

The Rise of Theodore Roosevelt

Team of Rivals: The Political Genius of Abraham Lincoln

Adventure at the highest!

I was truly flawed by this book. I knew little about T.R. a true explorer of his kind. The writer wrote flawlessly and kept me going all the way. As an avid reader when i find a book this good i purposely slow down my reading so i may make the book last longer. I highly recomend this book going to the Amazon is exciting,dangerous and down right scary as well as beautiful read this book it will never let you down!

TR & Candice Millard At Their Best

You have to ask yourself if Theodore Roosevelt had a death wish. On the trip down the ?River of Doubt? in the Amazon, (which was funded by the American Museum of Natural History), two members of the party died en route. (One was murdered, the other fell overboard, and the body was never recovered.) In the process, an unknown river was ?discovered?. Of course the native tribes in the area didn?t need anyone pointing out what they knew already. It was for the voracious Westerners, who licked their chops at every new extractive possibility, that this was big news.
Mr. Roosevelt had a very hard time of it on this journey. The rainforest was an unfamiliar environment. The author, Candice Millard, went to great lengths to describe the unforgiving and delicate nature of the bio-system that greeted the explorers in 1914. The former president, who prided himself on self-sufficiency, barely made it out of the jungle alive. And, the diseases he carried with him afterward, from malaria to infections, finished the job, because he was dead by 1919.
Theodore Roosevelt was not your run-of-the-mill wealthy Republican. Although he was brought up in privilege, once he left the mansion in Oyster Bay, he carried his own weight. That?s not to say that he did as much work as the camaradas, (who were hired to do the lugging on this particular expedition), but he was more than willing to help out when the need arose.
Of course everyone remembers Mr. Roosevelt as our most famous Progressive, (using the old definition of the word, because he was not a leftist). If you really examine the record he was quite moderate by modern standards, (especially in comparison to the socialists and Wobblies of his day). He did enforce the antitrust laws, (once or twice), and he did commence with federal food inspection, (after reading ?The Jungle? by Upton Sinclair). However, he needed a little prodding on the issue of child labor, (in the form of a children?s march led by Mary Harris ?Mother? Jones). And he rarely found himself agreeing with the unions. But Roosevelt?s political life is not on trial in this book.
What we have here is a tale of perseverance. In fact, this trek would make a very good movie, and it would not have to be embellished, (or ?based on facts?). The actual record would suffice. To tell you the truth, John Wayne at his best couldn?t come close to this group. The list of hardships that had to be endured will astound you. In addition to mammal-eating piranhas, there were fish that jumped out of the water and jumped into your nearest orifice, (to infect your bladder or urethra tube). Swarms of insects had to be dealt with on a continuous basis, causing malaria, and other tropical diseases. Snakes and Caimans, (South American crocodiles), were everywhere. Rapids and waterfalls had to be bypassed. (Boats and supplies had to be humped through the jungle around the obstructions.) The native tribes at the time, (in that area), had never seen Europeans, or Americans. They were armed with poisonous arrows, and they weren?t thrilled with foreign interlopers invading their territory. (Can you blame them, especially in view of what happened next?)
You might be tempted to think that this group of ?discoverers? had no right to be in that territory at all, that if justice prevailed, they should have left well enough alone. I would be inclined to agree with that. But because we are dealing with a period of history when imperialism was ascendant, (and that one of the participants, Theodore Roosevelt, was a chief proponent of that philosophy), we have to look at it in the historical context. Also, if it is any consolation, one of the co-leaders of the group, Candido Mariano da Silva Rondon, was the chief executor, and founder, of Indian rights in South America, (even though future incursions included the slaughter of the self-same indigenous people.)
But none of that will detract from your enjoyment of this book because the author will put you right in the dugout canoe. You will feel the sweat on your neck. The humidity will soak through your clothes. You will picture yourself sleeping with one eye open in the night listening to the hooting and growling of animals. You will never look at a body of water again, without thinking of the danger that lurks beneath the surface.
That is why despite my political misgivings regarding Theodore Roosevelt I have to tip my hat to his bravery. This fifty-five-year-old could have spent his remaining years on the cocktail circuit, going from one soiree to the next, or hibernating in his library. Unlike other excursions, (which included a ?Safari? or two), his mission was not the killing of animals for the sheer pleasure of it. Whatever wildlife was taken was for survival only, (other than samples for the museum). He went into this project with a slightly racist attitude regarding Hispanics. He came out of it with nothing but respect for his foreign hosts. They literally saved his life and protected him from harm. The image of his humility runs counter to our common perception. But then again, how well do we really know our historical figureheads? How much of what we are force-fed in school hangs on to prejudice our judgment later? Candice Millard should be commended for a job well done. This is a book for the ages.

If you enjoyed reading books about Earnest Shackleton's expedition to Antarctica, you will love this book. It draws you in from the first page and you feel as if you are along on the adventure. Not only do you get to know the adventurers themselves, you get a lesson in geography, botany and entomology. And let's not forget the fish and reptiles! All the better because it is based on true events and featuring one of America's larger-than-life presidents, Teddy Roosevelt. Hope you have a long weekend to read this---you won't want to put it down until you know how it ends.

One of the most interesting, well-written books we've ever read. A fascinating picture of Teddy Roosevelt, creatures of the Amazon jungle, interpersonal relations in a hazardous environment and more. Wonderful read!

Shackleton in the Amazon

The writing is a bit uneven - feels like a collection of articles and essays - but the story keeps you reading. Similar to Shackleton's expedition, some of their experiences were unimaginable.