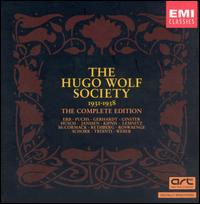 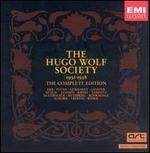 The songs of Hugo Wolf (1860 -- 1903)combine great attention to textual detail with closely intertwined writing for the voice and the piano. In this small form, Wolf was a master and took song in a different direction from that of Schubert, Schumann and Brahms. He wrote most of his songs in bursts of activity in five large collections, devoted to the poetry of Morike, Eichendorff, Goethe, and to collections of Spanish and Italian texts. He also composed a number of songs in shorter sets.

In the early 1930s, a young Walter Legge began a project of recording Wolf songs on a subscription basis to be limited to 500 sets. The recording industry was relatively new, and Wolf, then as now, too little appreciated. The result was an extensive series of recordings of issued between 1931 and 1938 consisting of 145 songs, about one-half Wolf's output, performed by fourteen singers. The Hugo Wolf Society recordings remain a high moment in the recording of song. They were remastered on LPs and, in 1998, in this 5 CD collection which includes previously unreleased selections.

The Wolf Society collection offers an unparalleled opportunity to get to know Wolf's songs performed by artists of the past that might otherwise be unfamiliar to many listeners. The performers include mezzo-soprano Elena Gerhardt, who recorded the initial volume for the society, baritones Herbert Janssen, Gerhard Husch, tenors John McCormack, Karl Erb, and Helge Roswaenge, the basses Alexander Kipnis, Frederich Schorr, and Ludwig Weber, and sopranos Alexandra Trianti, Elizabeth Rethberg, Ria Ginster, Marta Fuchs, and Tiana Lemnitz. The pianists include Conrad Bos, Gerald Moore, Michael Raucheisen, Hans Udo Muller, and Ernest Victor Wolff.

The singers perform in a variety of styles from the highly operatic to the quietly lyrical. There is a Wagnerian performance of Goethe's "Prometheus" by Friedrich Schorr with the London Symphony Orchestra -- the only track using an orchestral accompaniment. The Irish tenor John McCormack shows a more lyrical approach in his renowned performance of Goethe's poem "Ganymed". The sopranos, Alexandra Trianti, Ria Ginster, and Tiana Lemitz have light, clear, bell-like voices. I find the singers on this compilation take a much more individualized, idiosyncratic, and romantic approach to song than do their modern counterparts, who sometimes seem restrained and chaste by comparison.

Each of Wolf's great collections of songs is well-represented. Elena Gerhardt performs songs from each of Wolf's five books, with the exception of the Goethe songs. The young Alexander Kipnis gives a powerful reading of Wolf's three songs from Michaelangelo. The third CD in this collection features many songs from the Italian songbook performed by soprano Ginster, baritone Husch, and bass Kipnis together with recordings from the Spanish songbook by sopranos Rethberg and Ginster and baritone Husch. There are lovely performances by soprano Tiana Lemnitz in the previously uncollected supplementary material, which also includes several Eichendorff songs and a performance of the Goethe-song "Phanomen" by Alexander Kipnis.

There is a great amount of material in this collection, with each of the 5 CDs including in excess of 70 minutes of music. Most of Wolf's songs are highly concentrated and intense. They may prove difficult to the listener coming to them knowing only the lyricism of Schubert. I would not recommend trying to rush through this set at one or two hearings. It is best to take this music in small sections and to listen with text in hand. The compilation includes texts and translations for each of the songs together with good notes about the Wolf Society recording project. There is little discussion about Wolf or about the songs themselves.

This is an essential collection for those who love song, historical recordings, and the music of Hugo Wolf.