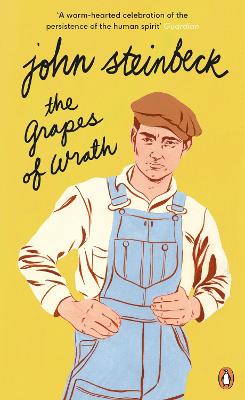 The Grapes of Wrath

An epic human drama by John Steinbeck, one of the greatest American writers of the twentieth century, The Grapes of Wrath depicts the devastating effects of the Great Depression, and won both the American National Book Award and the Pulitzer Prize. 'To the red country and part of the gray country of Oklahoma, the last rains came gently, and they did not cut the scarred earth.' Drought and economic depression are driving thousands from Oklahoma. As their land becomes just another strip in the dust bowl, the Joads, a family ... Read More

An epic human drama by John Steinbeck, one of the greatest American writers of the twentieth century, The Grapes of Wrath depicts the devastating effects of the Great Depression, and won both the American National Book Award and the Pulitzer Prize. 'To the red country and part of the gray country of Oklahoma, the last rains came gently, and they did not cut the scarred earth.' Drought and economic depression are driving thousands from Oklahoma. As their land becomes just another strip in the dust bowl, the Joads, a family of sharecroppers, decide they have no choice but to follow. They head west, towards California, where they hope to find work and a future for their family. But while the journey to this promised land will take its inevitable toll, there remains uncertainty about what awaits their arrival . . . Winner of the Pulitzer Prize, The Grapes of Wrath is an epic human drama. Of this novel, Steinbeck himself said: 'I've done my damndest to rip a reader's nerves to rags, I don't want him satisfied.' Read Less

All Editions of The Grapes of Wrath

Of Mice and Men

Travels with Charley: In Search of America

The Old Man and the Sea

To Kill a Mockingbird

The Catcher In The Rye

We Are All Tom Joad

I am not an economist so I am not even going to try to understand the economic mess were are in as a nation ? but I cannot help but think about The Grapes of Wrath and the odyssey of the Joad family when I think about our current financial times. Massive debt. Budget shortages. Home foreclosures. Business failures. Bankruptcies. Job losses. In some ways I feel that we are all (well many of us) Joad?s now ? trapped in a financial system that we do not understand, trying to make a daily living, but always feeling that we are taking one step up and two back.

My favorite scene in The Grapes of Wrath was early in the book, when a tenant farmer is trying to stop his home and land from being plowed over by tractor-operator hired by the bank. This is a man he knows, a local, who has taken a job with the bank to gain a regular salary and some stability for his family. But, this stability comes with a huge price. His job is to repossess the land of his friends and neighbors and ready it to be turned over to the banks. How many of us would do the same? Life is a struggle and when money is tight we would do most anything to pay the bills and feed our own ? but where do we draw the lines? The tenant wants to shoot him ? but the man explains the truth ? it?s not him, not his fault ? it?s no one?s fault ? we are all ghosts in the money machine. This is a slice of that conversation:

"It's not me. There's nothing I can do. I'll lose my job if I don't do it. And look ? suppose you kill me? They'll just hang you, but long before your hung there will be another guy on the tractor, and he'll bump the house down. You're not killing the right guy."

"You're wrong. He got his orders from the bank. The bank told them: "Clear those people out or it's your job."

"Well, there's a president of the bank. There's a Board of Directors. I'll fill up the magazine of the rifle and go into the bank."

The driver said: "Fellow was telling me the bank gets orders from the East. The orders were: "Make the land show profit or we'll close you up."

"But where does it stop? Who can we shoot? I don't aim to starve to death before I kill the man that's starving me."

"I don't know. Maybe there's nobody to shoot. Maybe the thing isn't man at all. Maybe, like you said, the property's doing it. Anyway I told you my orders."

The financial machine we live inside often challenges our morality, our faith, our ethics in exchange for a paycheck. Think Glengarry Glen Ross, think sell or be fired, think it me or you and its not going to be me. So we take a nice long trip to Disney to forget all about it. Maybe we have a food drive at school ? help the less fortunate. How are we supposed to live? Is this really it? Work your butt off, get as much as you can, hoard as much as you can ? every man for himself. Really? The Joad?s are not bums, not lazy, not moochers. They are simple folk who want to work ? an honest days work for an honest days pay. But the fruit growers of this novel are the factories of Mexico, China, Vietnam, and every other ?third world? country that produces our clothes, shoes, food and products. They are in a race to the bottom ? pitted against one another for jobs ? always pushed to do more for less. Why? So we can buy three dollar T-shirts at Wal-Mart.

Don?t get me wrong ? I shop at Wal-Mart ? we all do ? we have to make our money stretch. We are all stuck. But can it change? As the tenant farmer went on to say:

"I got to figure," the tenant said. "We all got to figure. There's some way to stop this. It's not like lightning or earthquakes. We've got a bad thing made by men, and by God that's something we can change."

I think the beginning is within each of us - within me. We (I) made this mess ? we (I am) are part of this mess. We (I) can change it by waking up, beginning to care and changing how we (I) live, think and treat one another ? today. We (I) need to begin to want less, expect less and need less. This concept is antithetical in a society based on consumption ? but will help forge a world that is more humane and loving. It is time to withdraw from the ?Grand Illusion?, to unplug the television, cancel your (my) subscription to all your (my) magazines, especially - ?You?re Not Skinny Enough? Monthly, ?My House is Perfect ? What?s Up With Yours? Weekly and ?Look How Rich I Am? Daily ? shut it off ? go outside, appreciate what you have, love one another, seek God and be what he has commanded us to be in this life ? witnesses to his Word, not buyers of more garbage. As Americans we need to see ourselves for what we are ? from a global perspective ? we are the rich oppressors. Our want?s, needs, desires, and struggles impact the world. We need to heed the following:

?Now listen, you rich people, weep and wail because of the misery that is coming upon you. Your wealth has rotted, and moths have eaten your clothes. Your gold and silver are corroded. Their corrosion will testify against you and eat your flesh like fire. You have hoarded wealth in the last days. Look! The wages you failed to pay the workmen who mowed your fields are crying out against you. The cries of the harvesters have reached the ears of the Lord Almighty. You have lived in luxury and self-indulgence. You have fattened yourselves in the day of slaughter. You have condemned and murdered innocent men, who were not opposing you.? ? James 5: 1-6

Although The Grapes of Wrath is a story about the Great Depression, it is a story of our lives - today. Many in this nation are doing very well ? their houses keep getting bigger, their cars more expensive, their travel more extensive and their luxuries increase? but what about the rest. The Joad family represents ?the rest.? All those people who have been foreclosed upon; laid off ? forgotten. Where do they go? What do they do? Do we care?

This is not a political perspective ? politics do far more harm than good ? nothing has been changed through legislation. Problems such as this require a change of the heart. It requires us to look each other in the eye ? see one another as fellow humans ? a mother, father, husband, wife, sister, brother, son, or daughter ? not as a number or a servant. I believe that we as a nation will reap what we sow ? it is for us to decide what that will be. Our final reward will be contingent on how we treated the least among us ? every day. I am far from doing this ? my eyes are just opening to my personal greed, narcissism and selfishness ? but all change begins with the decision to change. What is your decision?

This book startled me in a way that was totally unexpected.
I will remember the ending until I am old and senile and I'm convinced I will ever shiver at the recollection.

One of the best books ever written

This book will break your heart one moment and make you laugh out loud the next. Steinbecks characters are so real that they feel like people you know. A must read for everyone, especially those interested in American history.

I have always been a Steinbeck fan and I chose to give this book to my adult daughter to let her see how bad things were compared to today's economy. She so loved the book that she wants to read more of this writer's work.

The Grapes of Wrath is a book everyone should read but this was a college study guide. Just afew pages long and I was expecting the full book. This was not in the book discription.