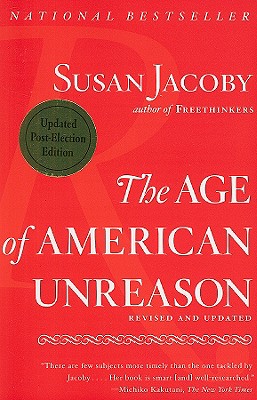 The Age of American Unreason

Combining historical analysis with contemporary observation, Susan Jacoby dissects a new American cultural phenomenon-the addiction to infotainment, from television to the Internet, which has resulted in a lazy and credulous public. Read More

Combining historical analysis with contemporary observation, Susan Jacoby dissects a new American cultural phenomenon-the addiction to infotainment, from television to the Internet, which has resulted in a lazy and credulous public. Read Less

All Editions of The Age of American Unreason

Freethinkers: A History of American Secularism

Never Say Die: The Myth and Marketing of the New Old Age

Collapse: How Societies Choose to Fail or Succeed

A People's History of the United States: 1492-Present

God is Not Great: How Religion Poisons Everything

This book arrived exactly as described and the service was precise and on time as predicted.

Item received as described without any issues that were not disclosed, and the item was received quickly and in good condition.

Clears it all up

Educational but a little depressing

I certainly learned a lot from "The Age of American Unreason," but my fear is that no one is going to read this who isn't part of the left. The first half of the book deals with the history of our country and the way in which the educational system developed without national standards or control, leading to regional disparities that still exist today. She also delves into the association in the public's mind between intellectuals and Communism. Later, she addresses interesting topics such as the effect of screen viewing on infants and toddlers, and the decline of conversational skills in all ages due to isolating technology such as iPods and text messaging. Especially mind-boggling is the relationship between right-wing intellectuals, who hide in the shadows pretending NOT to be intellectuals, and power. There is a wealth of information here, but she certainly does not pull her punches (liberals get a small share of blame, but heaps of it go to the far-right). I found myself energized to go out and rally the intellectual troops, but I also sort of feel like part of the choir to whom she is preaching and I wonder if maybe the people who REALLY need to hear this will feel insulted and reject her conclusions out of wounded pride. Granted, this action would probably prove many of her ideas, but you can't change the world if people won't hear your message. On the other hand maybe she deserves credit for writing such an unflinchingly honest analysis. She certainly didn't tip-toe around partisan issues in an attempt to sell more books!