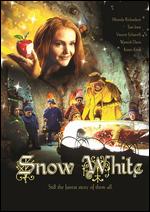 Shown theatrically in Europe and the Middle East in 2001, this live-action version of the classic fairy tale "Snow White" often bids fair to be the grimmest of all Grimm Brothers adaptations. When his wife Josephine (Vera Farmiga) dies in childbirth, hapless woodsman John (Tom Irwin) and his newborn daughter Snow White embark upon a journey which ultimately finds them hopelessly lost in the snowy wastes. Praying for a miracle, John is visited by a seemingly benign spirit called "The Green-Eyed One" (Clancy Brown), who ... Read More

Shown theatrically in Europe and the Middle East in 2001, this live-action version of the classic fairy tale "Snow White" often bids fair to be the grimmest of all Grimm Brothers adaptations. When his wife Josephine (Vera Farmiga) dies in childbirth, hapless woodsman John (Tom Irwin) and his newborn daughter Snow White embark upon a journey which ultimately finds them hopelessly lost in the snowy wastes. Praying for a miracle, John is visited by a seemingly benign spirit called "The Green-Eyed One" (Clancy Brown), who offers to grant John three wishes: Nourishment, a kingdom, and a queen for a wife. Little does "King" John suspect that the Green-Eyed One is actually an emissary for Satan, and that his queenly new wife Elspeth (Miranda Richardson) is the Green-Eyed One's equally evil daughter. The familiar "Snow White" plot takes off from here, complete with Queen Elspeth's efforts to kill the "fair" Snow White (now grown up and played by Kristin Kreuk), her rescue at the hands of seven "little men"--each one a different rainbow color, each one named for a different day of the week--and of course, the last-act arrival of the Handsome Prince, here named Alfred (Tyron Leitso). Balancing its more frightening aspects with slapstick comedy and awesome special effects, the film debuted on American television as Snow White: The Fairest of Them All, and was first broadcast March 17 2002 as an episode of ABC's The Wonderful World of Disney. Hal Erickson, Rovi Read Less 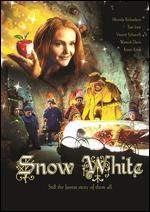 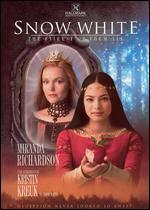 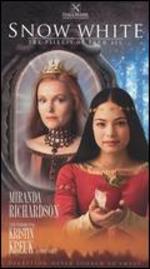 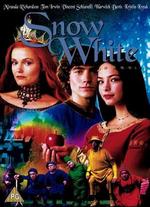 All Releases of Snow White: The Fairest of Them All 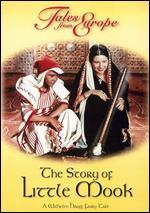 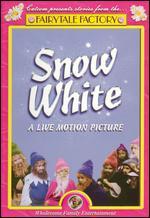 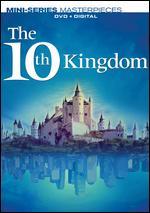 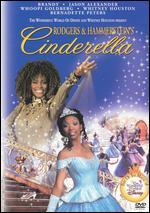 I had forgotten Disney's adaptation of the Brothers Grimm fairy tale and even what "Snow White: A Tale of Terror" (1997) was like so this introduced me once more to the story. The first actor I recognized, even under all that make-up, was Clancy Brown playing a genie-type character that was never quite fully explained. He's best known as "The Kurgan" in the first Highlander (1986) movie. Since some parts of this version of Snow White didn't make sense, I afterwards reached into my library and reread the (for all practical purposes) original Brothers Grimm version. I first read "Snow-White and Rose-Red", having missed "Little Snow White" in their voluminous collection of 210 stories. Anyway, I'm fortunate to have read both stories because this Hallmark version follows the original while leaving out some things and adding others. For example, there's nothing about a poisonous comb here and the genie has certainly been added. Snow White according to the Brothers Grimm, is in fact royalty to begin with, unlike her portrayal in this movie. It also takes a bit from the unrelated "Snow-White and Rose-Red" fairy tale i.e. the part about a bear actually being a bewitched prince.

I sort of preferred the original Grimm version of Snow White except for the ending which is better in this TV version, and just about every other on-screen adaptation of Snow White there has ever been, I would imagine. Somehow, the evil queen being made to dance until her death in iron shoes doesn't fit very well with the flow of the story. The evil queen by the way, is Snow White's stepmother. She married Snow White's father after his wife died giving birth to their only daughter. The king's role is virtually insignificant in this movie and one would have to admit even that was probably expanded compared to his role in the Grimm story. Kristin Kreuk, a newcomer to movies at the time, plays Snow White and is an excellent choice despite her slightly oriental looks. I suppose considering Snow White needing fair skin, dark hair and blood-red lips (true to the tale); Kreuk was perfectly cast.

Unlike the Grimm story, she's not a child of seven when all the drama takes place but more like seventeen. She appears very innocent and sweet, looking not unlike the cute baby squirming around in her crib, shown at the beginning of the movie. One could not mistake that she was actually this child all grown up, or maybe not so grown up. Another difference between the original "Little Snow White" story and this one was the final attempt of the evil queen to poison Snow White to death. Here, she takes the form of her alluring "real" mother (played by Vera Farmiga) instead of an old farmer's wife, and feeds Snow White a poisonous apple that finally does her in or so it would seem. Overall a good film with very nice sceneries and beautiful people but a few loose ends that would have been better tied up. I would recommend that viewers also read the Grimm version of the story to get a better idea where all this stuff is coming from and also to have the opportunity to interpret the story for themselves.