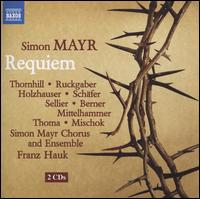 A World Premiere Recording of Mayr

Although the name of Simon Mayr (1763 -- 1845) is not familiar to most music lovers, his works have become well-represented on recording. Bringing Mayr's works to public attention has been the goal of conductor Franz Hauk who in 2003 founded the Simon Mayr Chorus and Orchestra in Munich. Hauk and his ensemble have recorded several of Mayr's works on Naxos. Mayr was born in Bavaria and spent most of his life in Italy. He began as a composer of oratorios but became most famous as a composer of operas. He composed more than 70 operas in his career.

This 2-CD set offers the world premiere of a rare Mayr work: the "Grande Messa da Requiem" in G minor. The compositional and performance history of this Requiem is obscure but probably dates from around 1818. It appears to have been performed several times during Mayr's life after which it languished in obscurity. When Hauk unearthed it, he did not find a fully assembled score. Instead lines and parts for the various instruments and movements were scattered in the archives which contain Mauk's compositions. The score had to be pieced together by combining seemingly separate autographs. Two small sections of the work were composed by Donizetti, Mayr's famous student, and then corrected by Mayr. It was a challenge assembling this long- lost Requiem, and I confess to a degree of skepticism about the authenticity of the result.

The work is composed on a large scale, particularly for the early 19th century. It is nearly two hours in duration and requires a large, augmented orchestra together with nine soloists: two sopranos, altos and tenors and three basses. The work is in a mélange of musical styles. It includes large choruses together with many solos for the singers. The moods and styles shift. There is some serious minor-key choral writing towards the end of the piece. Other parts of the score are graceful and lilting. The work includes several complex fugal sections. The overall effect, however, is of Italian opera with florid, highly ornamented vocal lines in a bel canto style. The soloists receive ample opportunity to show what they can do. The orchestral writing is highly elaborate and includes many passages of solo writing for horns, clarinet, cello, and other instruments.

The Introductory, Kyrie, Sanctus, and concluding sections of the Requiem focus on the chorus. The lengthy intermediate "Sequentia" in 11 sections are for the soloists. Most listeners would think they were hearing Italian opera in listening to the music. I though the singers performed beautifully led by soprano Siri Karoline Thornhill who takes many solos in the work. I had heard Thornhill in an early Hauk recording of Mayr's 18th century oratorio, "Jacob a Labano fugiens".

With the questions of how the work was reassembled for this recording and of the disparity in musical styles, I found this Requiem thoroughly enjoyable as a work of music. It flowed well and held my attention. It is a lovely rarity, and Hauk and Naxos deserve credit for rescuing the score and making the music available.

There are many composers who wrote lovely music but whose works are seldom heard, including Simon Mayr. Most music lovers tend to stay with established composers in their listening. This Requiem is a delightful piece but is probably best approached by listeners with a good background in Mozart and in the more famous Requiems by Berlioz and Verdi. It is a fine work for listeners interested in expanding their musical knowledge of the early 19th Century. Naxos kindly sent me a copy of this CD for review.