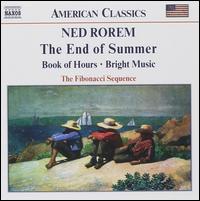 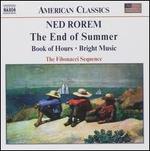 Many people know too little about the cultural achievements of Americans. This is particularly the case in the area of art ("classical")music, perhaps because American popular music in its many varieties has captured the imagination of much of the world. The Naxos Company, which specializes in inexpensive, innovative recordings of classical music has been producing a series titled "American Classics" with the aim of making American music available to the public at a low price. This is an altogether commendable aim. It is valuable both because it encourages the exploration of classical music and also because it encourages an appreciation of American creativity.

This disc of chamber music by Ned Rorem (b. 1923) is an outstanding addition to the series. Rorem is both a composer and a writer, best known for his art songs. (A collection of Rorem's songs is available on another Naxos disc in this series.) The performers are a group of seven young British musicians who call themselves the "Fibonacci sequence".

There are three pieces on the CD dating from 1975 through 1987. The first piece, "The End of Summer" consists of three movements and was written in 1985. It is scored for clarinet, violin, and piano. The most striking aspects of this music are the long declamatory passage for solo violin which opens the piece, and the lyrical secondary themes that appear in the first and third movement. The music does indeed have a yearning, autumnal quality.

The second piece on the disc, the "Book of Hours" was written in 1975 and is scored for flute and harp. It consists of 8 short movements. This music reminded me of Rorem's songs. In general, I found the flute taking the lead (as the vocalist in one or Rorem's songs) and presenting a declamatory line in the music with the harp punctuating and commenting on the flute through chords, runs around the theme, and otherwise. (As the piano seems to me to do in many of Rorem's songs.)

The third piece, "Bright Music" (1987) consists of five movements and is scored for flute, two violins, cello, and piano. The two outer movements are modernist in tone, yet both of them are based upon the final, mad movement of Chopin's "Funeral March" piano sonata. (The final movement is titled "Chopin") The third and fourth movement contain beautiful dream and dance sequences.

Rorem's music is in a distinctly modern idiom which yet will be accessible to the listener. The program notes to this CD are unusually thorough and will help the listener approach this music. This is an excellent recording. Naxos is to be commended for its efforts in bringing to the public American attainments in classical music.