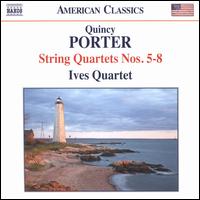 The Ives String Quartet made its debut on Naxos in 2007 with an album of the first four string quartets of Quincy Porter, in celebration of the 110th anniversary of his birth. The long-awaited second volume was released in 2015, presenting the next four works in the cycle, yet like the previous album, in a scrambled order. The program commences with the String Quartet No. 7 (1943), which is followed by the String Quartet No. 5 (1935), the String Quartet No. 6 (1937), and the String Quartet No. 8 (1950). Here Porter's mature music comes into focus, with its seriousness of tone and intensely worked counterpoint, and the blending of modal harmonies and chromatic dissonances becomes a distinctive characteristic of his sound. The Ives' performances are lyrical and highly expressive, and the group demonstrates a fluency and skill that makes these recordings extremely valuable additions to Porter's all-too-small discography. ~ Blair Sanderson, Rovi Read Less 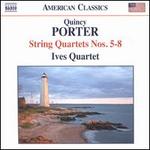