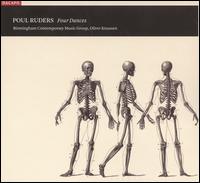 DaCapo's Poul Ruders: Four Dances features the Birmingham Contemporary Music Group under the direction of Oliver Knussen in a program of three Ruders chamber orchestra works, including one premiere, Abysm (2000); the others are Four Dances in One Movement (1983) and Nightshade (1987). Both Abysm and Nightshade were written for the BCMG and Four Dances in One Movement for the London Sinfonietta when Knussen led it. Although not as famous as his opera The Handmaid's Tale or his Solar Trilogy for orchestra, Four Dances in One Movement is viewed as being an emblematic work in Ruders' canon and represents something of a breakthrough for him. Its opening movements -- "Whispering" and "Rocking" -- are mysterious, restrained, and aren't likely to make you get up out of your seat and start dancing, but the latter two -- "Ecstatic" and "Extravagant" -- do have a lot of movement in them. It has been observed before that Ruders' fluctuation between introverted and extroverted ideas, and this work is almost a... Read Less