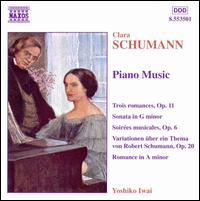 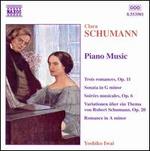 Clara Schumann (1819-1896)has been getting increased attention in recent years. Only a month ago, I attended a world premier of an opera by the American composer Robert Convery titled simply "Clara" based upon the events of this great woman's life. A recent historical novel by Janice Galloway also titled "Clara" has also been widely read and praised. There has also been an increasing number of CDs which explore Clara Schumann's rather limited compositional output, particularly her songs and piano music. Clara Schumann did most of her composing in her teens, before her marriage to Robert. She composed sporadically during the marriage, largely for celebrations with Robert such as birthdays. When Robert died in 1854, Clara stopped composing altogether even though she outlived her husband by 44 years.

The disk under review features a good selection of Clara Schumann's piano music on the budget-priced Naxos label performed by Yoshiko Iwai. On the basis of this recording, Ms. Iwai is an outstanding romantic pianist. She exhibits fluid and graceful rhythm, a light and meditative touch, and great sensitivity to this music. I wanted to hear something of Clara Schumann, and it was a delight to find Ms. Iwai as well.

Ms. Iwai's recital consists of five pieces which range over Clara Schumann's career as a composer. The earliest pieces on the program are six "Soirees Musicales" opus 6 written when the composer was 16. These are pleasing works of a young composer who was obviously under the deep influence of Chopin. The works themselves are in Chopin's forms, including a toccata, two mazurkas, a polonaise, ballade,and nocturne.

The next two chronological works are the strongest musically on this album. The first is the "Three Romances" opus 11 written when Schumann was 20. These romantic works also show the influence of Chopin but show lyric and individual gifts as well. In the words of Pamela Suskind, who edited an edition of Clara Schumann's piano music, these three romances "reflect considerable talent, inventiveness, and skill".

The musical highlight of this disk is Clara Schumann's sonata in g minor. This work was not published in the composer's lifetime but dates from about 1841. The work is in four movements featuring a long meditative opening movement, a short songlike adagio, a scherzo, and a melancholy rondo. This lovely sonata would bring credit to any composer.

The final two works on this CD date from 1853, just before Robert's death. The first consists of seven variations on a theme by Robert Schumann, opus 20. Clara Schumann wrote this work to celebrate Robert's birthday and never intended it for public performance. It is, indeed, a private work, which focuses heavily on Robert's theme with only minimal variations. The final work, also written in 1853 is a short Romance in A minor written for a blind friend of the composer.

I enjoyed approaching this music simply by turning out the lights, putting on the CD, and hearing it through. This music is meditative and quiet and some of it, such as the sonata and the opus 11 romances, show, I think, a distinctive talent. It is invaluable for those who love music to be able to explore works in addition to the most famous handful of works by the most renowned and gifted composers. There are many so-called minor composers whose works have received little attention who are able to delight and to inspire. Clara Schumann is one of these composers, both for the dignity of her life, and for some precious moments in her music. Those wanting to explore Clara Schumann's piano music will enjoy this CD and Ms. Iwai's pianism.