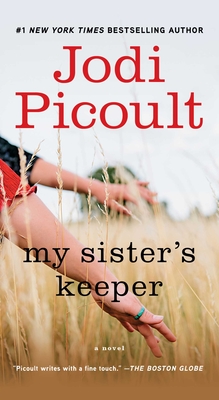 Expect to be kept up all night by Picoult's latest novel, but it's much more than a page-turner; it's a fascinating character study framed by a complex, gripping story Told in alternating perspectives by the engaging, fascinating cast of characters, Picoult's novel grabs the reader from the first page and never lets go. This is a beautiful, heartbreaking, controversial, and honest book.' Booklist Anna is not sick, but she might as well be. By age thirteen she has undergone countless surgeries, transfusions and shots so that ... Read More

Expect to be kept up all night by Picoult's latest novel, but it's much more than a page-turner; it's a fascinating character study framed by a complex, gripping story Told in alternating perspectives by the engaging, fascinating cast of characters, Picoult's novel grabs the reader from the first page and never lets go. This is a beautiful, heartbreaking, controversial, and honest book.' Booklist Anna is not sick, but she might as well be. By age thirteen she has undergone countless surgeries, transfusions and shots so that her older sister, Kate, can somehow fight the leukemia that has plagued her since childhood. Anna was brought into the world as a bone marrow match for Kate a life and a role that she has never questioned until now. Like most teenagers, Anna is beginning to question who she truly is. But unlike most teenagers, she has always been defined in terms of her sister; and so Anna makes a decision that for most would be unthinkable, a decision that will tear her family apart and have perhaps fatal consequences for the sister she loves. My Sister's Keeper examines what it means to be a good parent, a good sister, a good person. Is it morally correct to do whatever it takes to save a child's life even if that means infringing upon the rights of another? Should you follow your own heart, or let others lead you? What happens when emotion catches up to scientific advances? Jodi Picoult is known for her penetrating insights into the hearts and minds of real people, and as in her previous novels, she tackles a controversial real-life subject with grace, wisdom and sensitivity. Jodi Picoult's bestselling and widely acclaimed novels include Second Glance, Perfect Match, Salem Falls, Plain Truth, Keeping Faith and The Pact. She lives in New Hampshire with her husband and three children. Read more about Jodi on her website at ... Read Less

All Editions of My Sister's Keeper

The Book of Two Ways

A Spark of Light

The Secret Life of Bees

The Pact: A Love Story

My sister's keeper, a thought provoking book. Enjoyed over vacation.

Topic is a current one

This book offers the reader a lot to consider in view of today's medical procedures. It, of course has an interesting twist at the end, as do most of Jodi Picoult's books.

My initial intent for reading ?My Sister?s Keeper? was to help my child in understanding the summer reading assignment in case she has some questions. Then I decided to read it even though it was removed from the reading assignment for a reason that I am not quite sure. This is the only book that I read from this author. If she deprives and manipulates the characters in all her other books the way she did on this one, I prefer not to waste my time. I have two major problems with ?My Sister?s Keeper.?

I consider fiction writers as earthly gods. They are in charge of the fictional world of their work. But this doesn?t give them an ethereal ownership in the life of the characters in their work. Their control should be limited to the engineering of the personality that they give to any particular character. Then the story should flow its normal flow based on their original plot. Once they give some personality to a character, it should be that personality guiding that particular character throughout the story. If they tend to maneuver the characters in a way that contradicts with the personality they give them, then their work has a serious technical problem. Jodi Picoult did such a mistake in her book. For instance, the main character Anna is created as a teenage girl who was conceived as a spare-part manufacturer for her older sister. She feels that her parents don?t see her as a child but as her sister?s keeper. The book tells from start to end, Anna wasn?t planned to be a beloved daughter but a body-donor to her older sister, who has been fighting with Leukemia since the age of two. Now Ana is 13, and she has been under several surgical procedures in spite of current and future risks to her life. All the procedures were to harvest some body part for her sister, Kate. All the medical procedures from blood donation to the kidney transplant were not voluntary for Anna. They were all dictated by her parents particularly her mom. On top of that, her parents are extremely overwhelmed with their terminally ill daughter to deal with the parental needs of their other children. Living under the shadows of Kate, the book tells, has become unbearable for the other two kids, and they suffer physical and psychological distress. Their parents, even though they noticed the problems, chose to shove it aside. This is the Anna I was introduced to as a reader of the book. The Anna who is determined to take a stand and say ?no more physical abuses? to her parents but also who knows that she doesn?t have power on her own body unless she gets some legal protection. That is the character the author gave Anna until the day that her mom was served the court paper as a defendant. Then the author twisted Anna to be wishy-washy on everything. The author deprived the character from playing the personality she was given. Anna wasn?t a confused child; she had a clear mind of what she wanted to do. She knew the pros and cons of the lawsuit before she met the lawyer, according to the book. Then, all of a sudden, I got her as a feeble person. This is a violation of author-character relationship that Jodi Picoult committed repeatedly on ?My Sister?s Keeper.?

The lawyer, Mr. Campbell Alexander also suffered such a violation. He was a self-centered, opportunist, secretive, and a big-time liar when I met him first as a reader. Then he ended up being a responsible and considerate person with no concrete evidence or rationality for his behavioral change. In general, the author used her privilege as a writer/creator to toss the characters around with no professional decency. She painted them with different personalities depending on the outcome that she wanted. Her violation of the author/character relationship is also reflected in the story through Sara who violated the parent/child relationship with Anna to accomplish her mission for Kate. Regardless of all the words that the author put in the mouths of Sara, Brain, Anna, Julia, and Judge DeVont to picture Sara as a loving and committed mother, the Sara that a critical reader will find in the story is a kind of psychotic person who will take any risk to get what she wants including butchering her others daughter. Sara?s fight throughout the book is not only with leukemia; she fought with Anna?s existence too. She decides that if Kate is not living, neither will Anna. Even though Sara witnessed that all the blood, cell, bone marrow, and tissue that Anna donated to Kate didn?t stop the continuing relapses, the mother was determined to feed Anna?s body to the ever consuming Leukemia. Unfortunately, the author tried to cover such a maniac action with love. For one or another reason, the author noticeably takes side with Sara, which I found as technically weak.

I have to admit that I don?t like the imagination of Jodi Picoult in ?My Sister?s Keeper? due to the injustice it tried to justify. The author, just like one of her characters, Sara, is desperate of Anna?s kidney. She took her readers from family discussion to court room argument, then to a meditated murder, so she will get that kidney removed from Anna and transplanted in Kate. Campbell Alexander has been practicing law for years, and he always has his service dog with him. He is a known person for winning a several lawsuits But still, the author wants her readers to buy the idea that his health problem was a big secret around the court; and no one, including the judge doesn?t know about it prior his collapse in the court room at the last hearing of Anna?s case. The author disrespects not only her characters but also her readers at this point. What kind of ignorant environment was she imagining when she lays her plot? She wrote that Campbell has been living with epilepsy for about 15 years, and his service dog must be always with him to caution him from a sudden attack of the disease. And then she wrote that no one knows what the service of that dog was; the judge repeatedly refer the dog as a pet. After I finished reading the book, I tried to understand why the author chose to make such a mistake. She kept it ?secret,? so she can use it to murder Anna in a car accident. Anna, who repeatedly avoids contact with Campbell during and after court hearings, was forced to ride with him after the case was closed. And this was after Campbell collapsed with a major seizure for the first time ever. Another disrespect for her readers? intelligence.

Anna went to court seeking for justice. The author tried to justify all the physical and psychological abuses with love and the thin line of parenthood decision. Although she didn?t dare to use the justice system ruling against Anna, she came up with the unconventional accident that killed no one but Anna. The way the author closed the story, in my opinion, is very weak not only technically but contextually too. It is like slumming the door on someone?s face, rude. I have a real problem with authors who bang the story just because they lost either the interest or the energy to take the story to its end. As a reader, I don?t think the story got a proper finale. I am criticizing the author for ending it with tragedy; I don?t have any problem with that as long as it is done with all due respect to the story and the reader. But it is not fair or professional to close a story before it really ends. The way Jody Picoult ends the story tells me that she is so desperate to cure Kate with Anna?s Kidney; so she did it with irresponsible way. Even though I appreciate the author?s wish and will to help Kate, helping one at the expense of another is so selfish and unjust. I don?t think justice will be served through injustice.

One more point; Izzy was included just for the sake of political correctness because she is gay.

THIS IS A HEART WRENCHING NOVEL ABOUT TWO SISTERS AND A FAMILY TORN APART BY ILLNESS. IT IS A GREAT NOVEL FOR ADULTS AND YOUNG ADULTS AND IS SO TOUCHING. JODI PICOULT IS SUCH AN AMAZING AUTHOR EVER NOVEL MAKES YOU THINK HOW YOU WOULD HANDLE THE SITUATION IF YOU YOURSELF WERE APART OF IT.

I loved the book. It covers some great issues. This book appeals to teens and adults too.

Great book for teen discussion groups or parent to read with a teen.