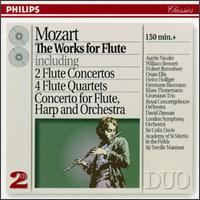 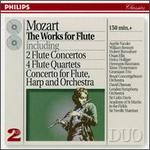 I gave this two-volume CD of Mozart's flute music as a birthday present to my ladyfriend. We listened to portions of it together, and I became so taken with the music that I borrowed the CD back to hear in detail. I spent a relaxed evening listening to this compilation in its entirety.

Mozart claimed to dislike the flute and, for that matter, the harp as well which also plays a prominent role in this compilation. But in spite of that, he produced music for the flute in a variety of genres all of which is delightful and much of which is masterful. This release on Philips's "duo" series presents an excellent opportunity for an overview of Mozart's works for flute, well played. It also offers a rare opportunity to hear a variety of performers on the flute and other instruments and orchestras.

I want to start with the Sinfonia concertante in E flat, K. 297b. This is a large-scale ambitious early work performed here on flute, oboe, horn, and bassoon with the academy of St Martin in the Fields conducted by Sir Neville Marriner. Aurele Nicolet plays the flute and the other soloists include the renowned bassoonist, Klaus Thunemann. This is a virtuoso work in which each of the four wind soloists are given opportunites to display their skills against a brilliant, expansive orchestra. The final movement consists of a lengthy set of ten variations in which the soloists perform in a variety of combinations. This is less a work for solo flute than a work for showing the exuberance and skill Mozart invariably displayed in music for the wind band.

Shortly after the Sinfonia concertante, Mozart composed his famous Concerto for Flute and Harp, K. 299. The performance on this CD features the London Symphony Orchestra conducted by Sir Colin Davis with Hubert Barwahser on the flute and Osian Ellis playing the harp. Mozart wrote this concerto for two talented amateurs rather than for virtuosos. It is salon, aristocratic music par excellance, gallant and graceful throughout. The flute tends to predominate in the solo writing, with the harp frequently accompaning or offering commentary on the flute part. The first movement has a lightness and a swing that is difficult to resist. The slow movement has a slow serene theme in which the flute and harp alternate with orchestral passages. The finale is a lively writing full of solo passages for the two instruments. The flute and harp concerto is a special, if light, work and remains my favorite of the works on this CD.

Mozart composed two flute concertos, K. 313 and 314, and both are included on this CD performed by Aurele Nicolet on flute with the Royal Concergebouw Orchestra conducted by David Zinman. The K. 314 concerto in D is the earlier of the two and is a reworking of a concerto Mozart originally wrote for the oboe. It is for the most part a bubbly, lively work in which the soloist is always predominant.

The flute concerto K. 313 in G is a considerably more ambitious work with an opening "maestoso" movement of a lengthy and elevated character. The vigorous, march-like orchestral passages are contrasted with a great deal of filigree and grace in the flute. The slow movement of this work has been widely praised and consists of a flowing, idiosyncratic theme in the flute, full of ornamentation and with many twists and turns in the melodic line. The rondo finale is light and bubbly in contrast to the character of the opening two movements.

Mozart wrote what appears to be an alternative slow movement in a pastoral character for the K. 313 concerto, the andante in C K. 315, also performed here. I was surprised with how little of Mozart's flute music is pastoral beyond the andante. (How easy it is to think of the flute as played by shepherds). Most of it is highly urbane and sophisticated, as is Mozart's music on the whole.

The final works on this CD are a series of four flute quartets performed by William Bennett, flute, together with the Grumiaux Trio. Two of these works are short, consisting of two brief movements each, while one of the remaining quartets, K. 298 was uncharitably and uncharacteristically described by Alfred Einstein as a "parody".

The remaining quartet, K. 285 in D major, pleases the most fastidious listeners. There is close interplay throughout this quartet between the solo flute and the string trio. The quartet opens with a lively theme in the flute over brushing strings followed by a close exchange of parts between the flute and violin. There is a brief section in the minor key and a surprising, brief coda. The second movement seems to me almost a sicilienne as the flute sings a long, plaintive melody over plucked strings. The work comes to a sprightly close with a rondo finale with the flute in the lead.

This CD will please lovers of the flute, such as my ladyfriend, and, of course, lovers of Mozart. I am sorry to have to give the CD back.