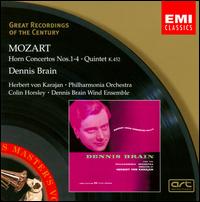 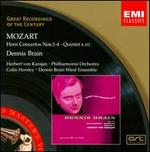 This recording by the great English french horn virtuoso Dennis Brain (1921 -- 1957) is one of the classics of recorded literature. The recordings of the four Mozart horn concertos with Herbert Von Karajan date from 1953 while the recording of the Mozart quintet dates from 1954. In 1999, EMI released a CD of the concertos and the quintet as part of its "Great Recordings of the Century" series. With the passage to the 21st Century, the recording has been reissued in a format titled simply "Great Classical Recordings." For those new to classical music, this recording is essential.

I recently had the opportunity to hear an excellent pianist in a recital of Mozart piano sonatas. Although I had looked forward to the concert, I was disappointed. I found the music performed in a slow, ponderous, lumbering, and over-intellectualized style. To me, the performer lacked a real feeling for Mozart, resulting in mannered, labored renditions. Mozart's music may not be overly demanding technically, but it is notoriously demanding to play well, idiomatically, and with feeling.

Part of my response to this failed piano recital undoubtedly were based upon this CD of Dennis Brain performing the Mozart horn concertos. I had been living with this recording for several days before attending the disappointing concert. I couldn't help comparing what I heard live on the piano with Brain's classic recorded performances on his horn. Brain seems to have Mozart inside him. It has been well said that he is the greatest performer of Mozart on any instrument. The music moves lightly but without frivolity. Brain produces a rounded tone, plays with simplicity and directness and emphasizes the horn for what it can do, including. legato passages, large skips, lumbering, humorous scales, repeated, staccato single notes, and hunting calls. His horn floats effortlessly above the wonderful orchestral performance on this CD by the Philharmonia Orchestra conducted by Herbert von Karajan. Brain captured Mozart in his playing in a manner which remains rare.

Mozart wrote his four horn concertos over a ten-year period for his friend Ignaz Leitgeib. The concerto in D, K. 412, was the last of the set and consists of only two movements. The remaining three concertos are in E-flat with three movements. These works lack the length and complexity of Mozart's piano concertos, but they epitomize the horn and afford great opportunity for Brain to display his musicianship. The horn is preeminent in all the works. The works are full of humor, with Mozart poking fun at Leitgeib, but rise to moments of lyricism particularly in the slow movements. The third movements are rondos which emphasize calls and hunting related themes.

The quintet is one of Mozart's finest works in any form. It is in a concerto style with the wind band complimenting the piano. It is also a "concertante" work in which each voice takes solos in turn.

Mozart wrote particularly effectively for piano and winds. Many critics have dubbed his piano concertos as concertos for winds with piano accompaniment. The horn does not have a predominant part in this quintet, in which all the instruments share equally. Ironically, given the emphasis accorded to Brain, Alfred Einstein wrote in 1945 of this quintet: "the particular charm of this work consists in its feeling for the tonal character of each of the four wind instruments of which none is disproportionately prominent-- not even the clarinet, which shares the leadership in true fraternity with the oboe; and in the fact that none of the instruments is subordinated -- not even the horn." (Einstein, "Mozart, his Character, His Work" p.265-66)

The quintet is in three movements. It opens with a long slow introduction in which blocked chords alternate with passages for the wind band. The allegro which follows the introduction has two primary lyrical themes in which the piano alternates with the winds. The second movement, a larghetto, features solos for each of the instruments, including Brain on the horn, in a movement that increases in intensity as it progresses. It is beautiful to hear each voice of the wind choir as it plays with the piano. The finale is a rondo, full of high spirits and of further interplay between the piano and each of the winds taking turns as soloists and in ensemble.

Brain/Karajan playing the Mozart horn concertos is one of the few truly essential recordings for all lovers of music, from the beginner to the lifetime listener. This CD constitutes an ideal, unthreatening way to introduce the new or the young listener to the joy of making music. The great quintet, K. 452, is on a intimate level that will probably have its strongest appeal to those already familiar with Mozart and with the beauty of chamber music.