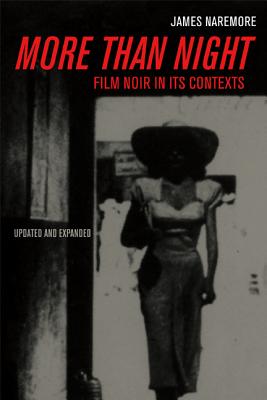 More Than Night: Film Noir in Its Contexts

"One of the very best film books in recent years. . . . There are any number of books on noir, but none as comprehensive, as rigorous, as far-reaching as Naremore's. . . . It will be the essential work for the field."--Dana Polan, University of Southern California Read More

"One of the very best film books in recent years. . . . There are any number of books on noir, but none as comprehensive, as rigorous, as far-reaching as Naremore's. . . . It will be the essential work for the field."--Dana Polan, University of Southern California Read Less

All Editions of More Than Night: Film Noir in Its Contexts

Letter from an Unknown Woman

Acting in the Cinema

The Magic World of Orson Welles

The Treasure of the Sierra Madre

Voices in the Dark: The Narrative Patterns of *Film Noir*

The Dark Side of the Screen: Film Noir

More than Night: Film Noir in its Contexts by James Naremore is easily one of the most comprehensive books of its kind. Structuring his examination of film noir on the definition of the term leads him to look at a variety of films and how they can fall under the category, thus providing the reader with a host of films that demand revaluation.

Naremore approaches the inspection of film noir like a detective - he doesn't know precisely what Film Noir is, but he does know of the many visual and thematic elements that occur in the many phases of what is referred to as a genre. As he clearly states in the opening chapter, "despite scores of books and essays that have been written about it, nobody is sure whether the films in question constitute a period, a genre, a cycle, a style, or simply a "phenomenon"" when they talk about film noir.

But furthermore Naremore states that the way we perceive the qualities of this particular kind of film is a formal one. As he sees it, "noir is almost entirely a creation of postmodern culture- a belated reading of classic Hollywood that was popularized by cineastes of the French New Wave, appropriated by reviewers, academics, and filmmakers", thus putting into question whether the actual qualities of film noir were intentional or just a characteristic of a creative wave birthed by the mother of invention, the need and desire to make movies with little resources.

Placing an historical date on film noir Naremore locates it in Paris between 1946 and 1959 during the period of adjustment after World War 2 when people viewed life in a particular existential mode after seeing the horrors of war that had ravaged Europe. In 1946 a writer named Boris Vian was asked to create a series of murder novels that would rival the popular S?rie noire publication, and Vian synthesized the themes of William Faulkner's "Sanctuary", and Richard Wright's "Native Son" in violent nature, upon which "J'irai cracher sur vous tombes" (I'll spit on Your Graves) was created and became a hot-seller piece of fiction. Made into a film in 1959, it stars Christian Marquand as Joe Grant, a light-skinned African-African, who goes to a small Southern town to investigate the lynching death of his brother. He gets involved with a beautiful heiress who may be involved in the murder. The plot definitely sounds like a typical noir setup given the clandestine nature of murder, disguise and detection that the narrative includes. It was this coloring of a tale that set the European film reviewers onto a philosophical bent in regards to how a filmmaker thematically had organized his material, and this was fueled by the dearth of American films that had been made on the cheap, previously unavailable to audiences overseas during war time and now were showing in movie houses across Europe particularly in France where many of the outspoken film critics were residing.

Given the catalogue of stylistic elements, Naremore also offers possible suggestions as to when the first film noir appeared, suggesting D.W. Griffith's Muscateers of Pig Alley from 1912, and Louis Feuillade's film Fantomas from 1913 as possibilities. These are extreme early examples because as Naremore sees it, the elements of noir are not schematized enough to be grouped into genre. What we perceive as film noir is more a way of treating a subject, rather than a genre. We almost always recognize the visual and thematic qualities of noir and can catalogue them but these are never hard and fast absolutes. Things like high-contrast shadows, wet dark streets, and revolvers in the hands of nefarious characters wearing fedora hats, sexually suggestive beautiful mysterious women, plots to dupe good-natured folks out of money, or a robbery, or murder, and always crime motivated at some level by a character's hubris - these are the stereotypical tropes of a style. But there are noir themes that always involve characters plotting some shadowy activity, with the unexpected hand of fate intervening. These and other elements are utilized by filmmakers to create a condition of noir for a viewer.

Throughout More than Night: Film Noir in its Contexts Naremore examines films that contain some condition of noir, and his historical survey covers films from the earliest period through the advent of television, and even looks at how noir has been absorbed into print marketing, clothing, and even personality. More recent films such as Michael Mann's Collateral from 2004 about a hit man who uses a cab driver in Los Angeles to chauffer him to his victims is steeped in the noir tradition. Naremore also makes note of the film Sin City from 2005 which pushes high-contrast black and white imagery to the extreme, creating a cinematic comic-book world steeped in religious iconography, murder, revenge, pedophilia, sadism, and ultimate redemption. Highly stylized, these films wallow in a particular noir-ness.

The book also includes substantial historical support such as the introductory page from the Breen Office from the 1940s, a coverage page for films in production. Naremore questions how films such as This Gun for Hire, The Glass Key, and Laura could have been produced since the line separating sympathetic and unsympathetic characters is blurred, thereby diverting our attentions from the good guy to the bad guy by highlighting positive characteristics of the killer, and misdirecting the empathetic bond of the viewer with the characters in the film. It is the fact that these studio products of the time got through the system and released which is what makes them ripe for study as noir artifacts.

For any film lover who wants a comprehensive explication of Film Noir Naremore's book will have you reviewing many of the classic noir movies with a new perspective, and will introduce you to some films you will want to see for their noir tone. It's a great read.