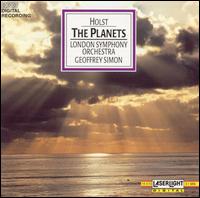 A Soundtrack of the Solar System

The planets of our solar system derive their names from the gods and goddesses of Greek and Roman mythology. In the orchestral suite The Planets, composer Gustav Holst has capably captured the personalities and moods of each of these deities and/or planets in seven movements. Mars, The Bringer of War sounds bellicose and foreboding. Venus, the Bringer of Peace is calm and sweet. Mercury, the Messenger is whimsical and capricious. Jupiter, the Bringer of Jollity is jovial and majestic. One hears the passage of time in Saturn, the Bringer of Old Age. Uranus, the Magician is hard to categorize as to mood; magical and distinctive are perhaps the appropriate descriptions as Uranus is the only planet in the solar system tilted on its side. Neptune, the Mystic is haunting and mystical. Taken together, these movements are a sheer pleasure to listen to. Highly recommended.