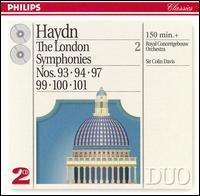 I have been listening to many of Haydn's earlier symphonies on the ongoing cycle of the complete series on Naxos. But for the final set of twelve, Haydn's masterpieces in the form, I wanted Sir Colin Davis conducting the Royal Concertgebouw Orchestra. Davis has recorded the twelve London symphonies on two mid-priced Phillips "duo" CDs. The performances are outstanding and filled with ebullience. They will make a good introduction to Haydn for those new to his music and will delight long-term lovers of Haydn.

Beginning when he was about 25, Haydn composed for the wealthy and music-loving Esterhazy family. His fame gradually spread throughout Europe and, with the "Paris" symphonies, Haydn began to write works for a public broader than his aristocratic patron. With the death of Nicholas Esterhazy in 1790, Haydn received an invitation to visit London. He visited twice, in 1791-1792 and again from 1794-1795. His twelve "London" symphonies are the result. These are full-scaled symphonic creations showing the consummate mastery Haydn had acquired over the years. The works are joyous and lively and were immediately welcomed by Haydn's London audiences. They are also highly sophisticated and endlessly creative works of art which will reward careful listening and study. For those listeners wanting a more detailed, yet non-technical overview of the twelve London symphonies than that found on liner notes, I suggest consulting their treatment in Michael Steinberg's valuable work, "The Symphony: A Listener's Guide."

Haydn's most famous symphony is probably the 94th in G major, the "Surprise". The theme of the second movement, with the large "bang" at the end of the repetition of the opening phrase is one of the best-known moments of music, familiar to children. This remains an excellent work to introduce young people to music. The "surprise" movement proceeds with a lovely set of variations, and there is much to get to know, including more surprises, in the remaining three movements as well.

Symphony no. 100 is also in G major and is known as the "Military" for the martial tone of the second movement, replete with drums, cymbals, and triangle. In addition to the "Military" movement, this symphony features a vivacious finale replete with timpani, a contrapuntal section, and some soft moments of reflection hidden within the lively theme.

The "Clock" symphony, no 101 in D major is named for the tick-tock accompaniment figure in the second movement which is forever endearing. This movement gradually rises to a moment of passion as it develops. The work also features a lively opening movement, a lengthy minuet, and an outstanding finale that works from an innocuous opening to complex counterpoint.

The symphonies with nicknames are the easiest way to introduce the London set, but the symphonies without these names are on the same high plane. The first of the London set is symphony no. 93, also in D major. A memorable moment of this work is the opening of the second movement, which Haydn scores for a string quartet. The movement becomes rather introspective as it proceeds, but Haydn brings it back to earth with a toot on the bassoon at the close. The symphony opens with a slow. detailed introduction followed by an opening movement that develops two lively and lyrical themes.

The 97th symphony is the last of twenty Haydn symphonies in C major, a key he used for regal, ceremonial effect. The work opens with a surprisingly quiet slow introduction followed by an opening movement that develops broadly from many repetitions of the basic chord of C major.

The 99th symphony in E-flat major is the first in which Haydn used clarinets and, from the opening chord, clarinets play a major role in the texture of this work. This is one of the more complex symphonies of the London set, with a harmonically adventurous slow introduction followed by a movement that emphasizes the second of its two major themes. The slow movement is deeply intense and also stresses the second of the two primary themes on which it is based. After a lyrical, restrained opening, the movement turns to the minor key in a dramatic section before returning to the opening material, substantially embellished. The minuet combines elements of both courtliness and earthiness while the finale is rapid and culminates in a fugal passage. The 99th is one of the finest symphonies of an outstanding series.

This set, and its companion recording of the remaining six London symphonies, make a wonderful introduction to a great composer.