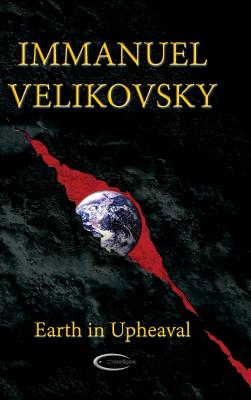 Earth in Upheaval - a very exactly investigated and easily understandable book - contains material that completely revolutionizes our view of the history of the earth. In this epochal book, Immanuel Velikovsky, one of the great scientists of modern times, puts the complete histories of our Earth and of humanity on a new basis. Read More

Earth in Upheaval - a very exactly investigated and easily understandable book - contains material that completely revolutionizes our view of the history of the earth. In this epochal book, Immanuel Velikovsky, one of the great scientists of modern times, puts the complete histories of our Earth and of humanity on a new basis. Read Less

All Editions of Earth in Upheaval

Ages in Chaos III: Peoples of the Sea

Peoples of the Sea

The Wars of Gods and Men

The path of the pole

The most Grandiose of events!

Velikovsky?s epic first book, Worlds In Collision (WiC), tells of ?battles of the planets?; his 2nd, Ages In Chaos, reconstructs Ancient history by synchronizing end of Egyptian Middle Kingdom with Exodus, both witness to a great world catastrophe. And in this book, his 3rd, revolutionizes the earth sciences. If legends and traditions mean what they say as alleged in WiC, this book answers to what physical ?scars? are evident on earth, participant in these ?celestial wars?. And the reader will be astounded with plenty of examples, from field works of earth scientists and reports from explorers. Carefully using just testimonies of ?bones and stones?, he boldly proposes the forces shaping many features on earth came from ?without?.

The book, well thought out and organized, starts with an Introduction then Acknowledgment, which he expresses his ?indebtedness to the many experts in their fields?, Einstein included. The main body is finely divided into chapters and further into sections, covering many parts of the world where specific geological and paleontological features are noteworthy. Before the Index are chapters ?The End?, where he discusses his conclusion, and the ?Supplement?, a transcript of his address to the graduate students of Princeton university, where he discusses recent finds in ?light of WiC?, still very relevant today.
This author speaks at your level, not over you; he strives for all to understand. His book is not dry; is very informative, very imagination challenging, even dramatic, is novel-like, even poetic, and at same time very disturbing, too.

Even the first page is startling, the first of many jolts contrary to the ?long long time ago? mantra of official geology and paleontology: a 'great slaughter of animals in the millions... found mixed along with uprooted trees and volcanic ash, deposited catastrophically in the muck throughout Alaska?, as was written by a university investigator; and in northern Siberia is the same spectacle of destroyed animals cemented together with splintered trees in ice and bitumen, as was reported by explorers and fur traders two centuries ago. To Velikovsky both these areas have a common connection and catastrophic origins must be considered. And elsewhere around the world, on land and sea, from arctic regions to the tropics, the deserts to the mountains, are more sites that demonstrate unequivocally violent upheavals of a global nature, which caused extinction of many forms of life.

And even Charles Darwin saw with his own eyes, while sailing along the coast of the Americas on board the Beagle, the demise of the Pleistocene animals great and small, and pondered in his notes: ??we must shake the entire framework of the globe?!

A must read this book is for academics and general public alike, whether one agrees or not with his theories. For this author-scholar, the espouser of a tremendous heresy, clarifies brilliantly just what the two pillars of today?s secular beliefs are: The theory of Evolution and the doctrine of Uniformity (geology of slow incremental changes through the eons), as conceived by Darwin and Lyell respectively. Since Velikovsky?s visions are so counter to the accepted creed of today?s popular earth and space sciences, he lays his case carefully how today?s accepted interpretations came about, and why in the end are to be regarded as flawed.

Most significant and interesting is the review of the Mechanisms of Evolution. The surprising irony is that to ?rescue? the concept of Evolution as a ?realistic mechanism?, there is need of Darwin?s greatest enemy: - Catastrophism! How species with superior attributes could succumb in the ?competition of the fittest? would be explained if the very arena itself, where the ?competition? took place, rose up and made the end of the ?contestants?.

So yes, there is Evolution, BUT, between each Tectonic Revolution!
Thus is introduced a new concept of ?Cataclysmic Evolution?.

Velikovsky offers new ways of looking at some familiar geological features, to name a few:

In North America, eruptions of thousands feet of lava out of fissures formed the Columbian Plateau (encompassing Idaho, Montana, Oregon, Washington): modern Lyellian Geology of ?the Present is the Key to the Past? definitely fails here.

The causes of Ice Ages: ? A Shifting of the Earth?s Axis? ? Then, BOILING of the oceans?
Here is seen origin of vast release of vapors ? Precipitations, falling as snow in higher latitudes, as rain in lower. Thus, Heat, as well as Cold, contributed to the Ice Ages! And, accompanying great fall of snow, that formed the glaciers, was concurrent great fall of rain, the Pluvial Age, during which great furrows were ?trenched? into and across the continents to form great riverbeds and tributaries.

Coal, instead of formed by slow deposition of decomposition and sedimentation, is rather the result of atomization of trees, leaves, insects, etc caused by violent upheaval of the wind, and then rapid burial.

Evidence of impacts and even ?avalanches? of meteorites abound, such as the fields of black and broken stones called ?harras? in deserts of Arabia, and the Carolina Bays, where many thousands of aligned elliptical shaped ?bays?, or impressions, are scattered throughout the Eastern United States.

In chapter ?Continent Torn Apart? he discusses origin of Africa?s Great Rift Valley, of which according to an explorer ??whatever force responsible, must have been of world wide dimension?.

And quoting from early 20th century geologist, Eduard Suess, author of The Face of the Earth: ?Numerous examples of great mountain chains suggest by their structure?episodic disturbances of such indescribable and overpowering violence, that the imagination refuses to follow the understanding??

Can anyone imagine experiencing earthquakes of such magnitude, covering the entire world?
If one REALLY tries to imagine perhaps REASONINGS will follow.

As data indicate to the ?powers from without?: shifting of the Earth?s axis, changes of geographic poles, and rotation of the lithosphere, the author makes point to the critics of his WiC that geologist and astronomers the late 19th & early 20th century DID discuss forces ?from without?, though never reaching a consensus on what those agents could be.

Immanuel Velikovsky, in his WiC, made the final step in identifying those agents.
And what a ?storm? of controversy he stirred up, still unabated today!

But for Earth in Upheaval?

Whatever those agents were, he said it best: ??must have been of titanic power?.

Greatest Author of his era

I ONLY wish our country were not so embellished and politically saturated with fictionalized Catholicism in bed with bogus and bigoted Nazism "racism" while joining together to create and promulgate fables and propaganda.

Spellbinding, rational explanations for many unexplained events in geology and other fields with many referenses from all over the world from studies of a tremendous upheaval during historical times that wiped out most of the living creatures on earth including man.