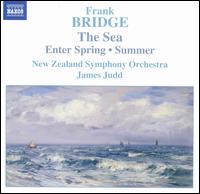 While there have been recorded performances as fine as those on this recording in the past, and while there are recorded performances as fine as those on this recording in the present, the fact of the matter is that the performances of the orchestral music of Frank Bridge on this recording with James Judd conducting the New Zealand Symphony Orchestra are still well worth hearing. Judd is an accomplished and sometimes inspired conductor who brings the best out of the competent but sometimes ragged New Zealand Orchestra and together they make the case for Bridge's unique brand of English late Romanticism into early Modernism. Lush in the four-movement suite called The Sea, lean in the harder-edged rhapsody called Enter Spring, Judd and the New Zealanders give everything they've got to Bridge's opulently angular music, making his lines sing, his harmonies resound, his rhythms move, and his forms flow. Although the dedicated Bridge aficionados will keep their old Charles Groves recordings and their new... Read Less