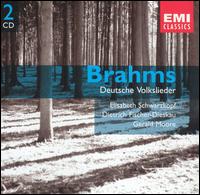 These songs, Brahms's German Folksongs, are a collection of intimate, romantic music for voice and piano. They are full of lyricism and center on timeless themes of love and loss. Brahms published the songs in 1894, late in his life, without an opus number. The songs were intended for domestic music-making rather than public performance. The songs are performed here by Dietrich Fischer-Dieskau, baritone, Elizabeth Schwarzkopf, soprano, and Gerald Moore, piano. One could hardly ask for more.

Brahms was a collector of folksongs for much of his life and a revival of German nationalism in music was among his goals in this collection. But Brahms took his work from a variety of sources. Although he used some authentic folk material, he also used composed collections of songs and collections intended to parody the interest in folk music in the audience of his day. (In the way in which Tom Leherer, for example, tried to parody the interest in folk music in the United States in the 1960s.) No matter. Brahms simply took the music he loved and set it. The songs are thus a combination of folk music, lieder, and parlor music fused together by Brahms's creativity.

In listening to these songs, I thought of the Irish-Scottish folksong settings which occupied Beethoven during his later years. Beethoven's settings, however, were done on commission. Delightful as they are, they don't flow from a personal drive to record and set folksongs (or alleged folksongs), as does Brahms's collection.

In his 1990 study of Brahms, Malcolm McDonald aptly describes the German Folksongs as returning "to a world of gallant knights, deserted maidens, enchanted fiddlers, repentant nuns, lovers both sad and happy, and death the Reaper -- an idealized medieval world, fit for the dreams of Young Kreisler." (Quoted in Jan Swafford, "Johannes Brahms a Biography at 595)

All of these songs are simple and accessible in stanzaic, strophic form. They are all short. Some of these songs are for solo male voice, others for solo female voice, and others for both. Interestingly, the two voices never sing together in this collection. Typically there is a stanza for one singer, a piano interlude, and a stanza for the other singer -- never both together. The piano part adds immeasurably to these songs in its short interludes and postludes and in its accompaniment. (There are only a handful of preludes for the piano in this collection.) Fisher-Dieskau, Schwarzkopf and Moore perform with love and feeling.

The program notes for this reissue are sparse and the texts of the songs are not provided. Brahms made significant alterations to his texts and, in general, was less concerned with matching text to melody than other composers of lieder. These songs communicate through their music.

This is a collection that will bring joy to any lover of song.