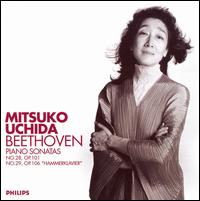 It's hard to pin down Mitsuko Uchida's performances of Beethoven's A major Sonata, Op. 101, and B flat major "Hammerklavier" Sonata, Op. 106. Of course, there's no debating her sparkling tone or dazzling technique. Since her first recordings in the mid-'80s, Uchida's pianistic mastery has always been amply evident. What's debatable is Uchida's artistic temperament. She is sometimes intimately lyrical as in the opening "Etwas lebhaft" of the A major Sonata and sometimes immensely monumental as in the opening movement of the ... Read More

Mitsuko Uchida (b. 1948) has achieved fame through her recordings of the sonatas of Schubert and Mozart. In recent years, she has turned to the sonatas of Beethoven. She has recorded a CD of the final three sonatas, op. 109, 110, 111, and this new CD includes opus 101 and the "Hammerklavier" opus 106. In this CD, Uchida has given a performance of late Beethoven to treasure.

This is an inspired recording indeed, as Uchida plays with what can only be described as complete musicality. Her playing, and her chosen repertoire, reminds me greatly of Wilhelm Kempff. I was stuck by the thought that is apparent in these readings, by the voicing, fluidity of rhythm, and lyricism. The latter quality is one not often associated with the "Hammerklavier", but in the contrasts Uchida brings out between the stormy, jagged sections of the work and the moments of song and reflection, Uchida finds a new dimension to this music.

Beethoven's composed his piano sonata in A major, opus 101 in 1814-1815 when the quantity of his compositions had diminished as the composer found a new musical direction. The companions to this work are the opus 90 piano sonata, the song-cycle "An Die Ferne Geliebte" and the two cello sonatas, opus 102. In the improvisatory character of the work, opus 101 bears some resemblance to the "Moonlight" sonata, opus 27 n. 2. This is one of my favorite works of Beethoven. It opens with a reflective, moderately paced wandering theme that Uchida makes her own with subtle shifts of tempo, and lovely tone quality through beautiful plangent voicing of the parts. She makes the most of the opening theme as it returns just before the fugal finale -- the first piano sonata that Beethoven would end with a large fugue. After the wayardly romantic opening movement, Beethoven writes a contrastingly vigorous march with a quiet interlude. The slow movement is short and intense and -- as is the case with the "Waldstein" sonata -- a prelude to the lengthy finale which consists, as I have noted of an elaborate and joyful fugue. This music is Beethoven at his greatest. Uchida brings out the depths of this sonata.

The "Hammerklavier", Beethoven's longest and most difficult piano sonata occupied him for the latter half of 1817 and for most of the following year. In the 19th Century, this work was regarded as almost unplayable. With the advent of recordings, we have been blessed with many performers who can bring the work to life. Unlike the other later piano sonatas, the Hammerklavier is in four large expansive movements, culminating with an enormous fugue as does the late b-flat major string quarter, opus 130. (The Hammerklavier also has resemblances to an early large scale B flat major piano sonata, opus 22, which, alas, is too little performed.)

There is an understandable tendency in recordings of the "Hammerklavier" to emphasize the virtuosic, discordant, heaven-storming and banging timbre of the work. Uchida has the strength to bring out these aspects of the score, but the uniqueness of her reading lies in her contrast of these qualities with the quieter moments of the "Hammerklavier." Her sense of the work as a whole comes out in the second theme of the opening movement, the long and introspective slow movement with its passages of filigree, and in the voicing and clarity she brings to the monumental fugal finale -- including the slow and reflective second theme. Beethoven wrote that in this finale he was not writing a strict Bachian fugue but rather was infusing the fugal form with his own feeling of poetry. Uchida brings out the strength and war-like character of the Hammerklavier but even more importantly its feeling of introspection and vision.