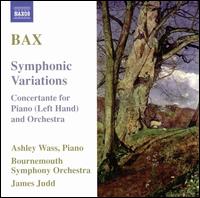 If this 2009 recording had been made 40 years earlier, it would certainly have been released on EMI. With a pair of works by one of England's best second-rank twentieth century composers plus performances by one of England's best provincial orchestras and one of her best up-and-coming piano virtuosos, it would have been a natural for one of England's best classical labels. Forty years on, however, it is left to Hong Kong's Naxos label to release Arnold Bax: Symphonic Variations, James Judd with the Bournemouth Symphony Orchestra's excellent recording of Arnold Bax's Symphonic Variations for piano and orchestra and Concertante for (Left Hand) piano and orchestra. Whether with two hands or one, Ashley Wass is a virtuoso pianist with a complete understanding of Bax's post-Romantic style, and his playing here makes a strong case for both works: the opulently emotional Symphonic Variations from 1918 and the more elegant expressive Concertante of 1949. Judd backs him to the hilt and the Bournemouth musicians... Read Less

Currently there are no new copies available. However, our inventory changes frequently. Please check back soon or try Book Fetch.