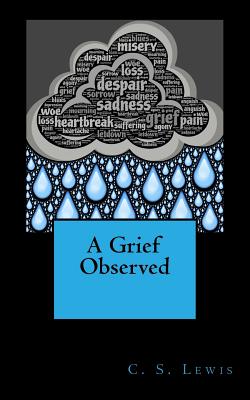 Written in moments of sadness and longing after his wife's death, C. S. Lewis's A Grief Observed is an honest reflection on the fundamental issues of life, death, and faith. This elegant trade paperback edition of Lewis's classic summons those who grieve to honest mourning and courageous hope. Read More

Written in moments of sadness and longing after his wife's death, C. S. Lewis's A Grief Observed is an honest reflection on the fundamental issues of life, death, and faith. This elegant trade paperback edition of Lewis's classic summons those who grieve to honest mourning and courageous hope. Read Less

All Editions of A Grief Observed

The Lion, the Witch and the Wardrobe

The Case for Christ: A Journalist's Personal Investigation of the Evidence for Jesus

The Cost of Discipleship

90 Minutes in Heaven: A True Story of Death and Life

I scanned the book and gave it to a friend who had just lost her husband in a tragic accident. She said she liked C.S. Lewis, and found the book very helpful.

C.S. Lewis married late in life, to a divorcee named Joy, who had bone cancer. He wrote a book about their relationship in a book called, Surprised by Joy.
After Joy died, he eventually wrote about his bereavement in this book; trying to understand grief itself, as well as his own. It was therapeutic for him to write it, and it is insightful to anyone who works around death and dying, as I do, or who is interested in palliative care.
Lewis allows himself to be vulnerable. He is a vastly capable communicator and a genuine human being who has experienced intense sorrow.

As a late middle-aged man, C.S. Lewis was expected to be a life-long bachelor. However, he was 'Surprized by joy', when he met and married his beloved wife, Joy. The beautiful story of their union has been told in several books, and in the well-recieved film "Shadowlands".
However, Joy was to die of cancer, and this unexpected tragedy was a severe trial for Lewis. It called his faith into question, and forced him to doubt the nature and existence of God, and the meaning of love and faith.
This book was not intended to be a published work, but rather the diary of the inner struggles which he experienced during his grieving. It was originially published under a psuedenym, and later re-published under his own name.
As such, is is not a theological treatise or a logically argued thesis, (as in some of Lewis' most famous works), but rather a portrait of a soul passing through suffering and revealing in a very honest manner his doubts and questionings.
Lewis was a profound and brilliant man, but also possesed a great gift of the ability to communicate Truth to the average reader. This book is no exception, and it might be argued that it's informal nature adds to it's power.
A great work.

This book is for anyone-C.S. Lewis is not your average 'christian' writer-he is an author-he writes in ways that illustrate not only what he was thinking and feeling but he makes you examine you own life through his writings. Please-take a couple hours and read this book-you will look at all the bad things in life differently and appreciate the good so much more!